I went to the breast feeding mothers support group, tender transitions, yesterday.  It's an hour away, so I only went because Mat had an appointment there.  They weighed Daughter and she had gained 6.5 ounces since Friday!  She's really growing!

There were a couple of lactation consultants there.  One tried to help me with my blister problem, but the only advise she had was the same as Pauline's (the LC I had seen for private appointments).  Just pump for a while when it becomes unbearable.  Once it heals, put Daughter back on the breast.  She also said that it might be because I'm fair skinned... but, oh well.

So I've been pumping.

After TT, I took daughter to the floor that Mat was on.  She was getting really fussy so I ended up nursing again in the waiting room!  Thank goodness for nursing covers! I used this tutorial
http://madebythemamamonster.blogspot.com/2008/04/nursing-cover-tutorial.html
but made some adjustment. No D ring because my neck is always the same size... less boning because I wanted a bit more privacy. 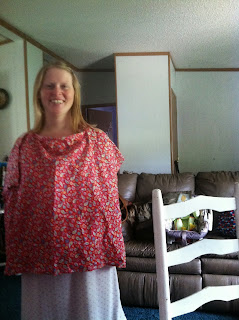 I'm going to make one for my sister :)  She wants one in a solid fabric though... I don't have any n my stash.  Guess I best get shopping!

I also made one of theses...
http://www.thecoterieblog.com/2012/05/diy-modern-nursing-shawl-sew-one-line.html

but I like the other so much I haven't even used it yet.

And here's a pic of Daughters "smiling for daddy" yesterday.  It's not the best quality, but it's a very happy pic :) 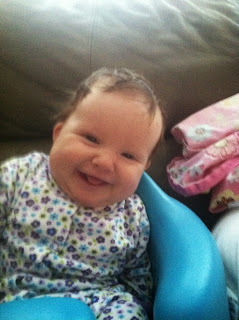