This year I got the garden in early!  We'd been having such nice weather and Mat tilled it up on Mother's Day for me. 40% bigger, but I got it planted already! 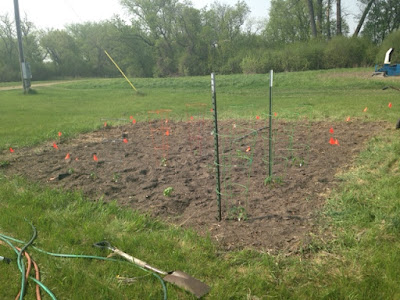 We've got the rhubarb and cilantro going as the perennials of the garden. We planted raspberries. I did three rows of sweet corn in the back from the seeds I saved two years ago. And partial rows of green beans. If the corn or the green beans don't grow, the. I'll just have to but store seeds and replant.  I also threw in some sunflowers in the back corner just because I had some seeds from years ago. We'll see of they grow.

But now it's supposed to be below freezing tonight.... That's what I get for planting early!  So I went out and blanketed. 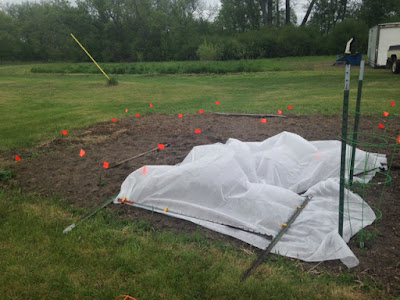 It is very windy today, and I'm a one-armed person. I think I did pretty well 😊

I wasn't able to cover the whopper tomatoes, because Mat had (at my request) preemptively stuck fence posts in to hold them up (we've had serious tippage in the past).

I just took down the cages that weren't posted in, put short sticks around each plant, and covered as best I could. With the fence posts that Mat brought over for me last night. Those things are heavy- so it'll hopefully stay put!
Posted by Malia at 1:21 PM

Email ThisBlogThis!Share to TwitterShare to FacebookShare to Pinterest
Labels: garden