Yesterday Mookie was running around outside and I looked out the window.  I noticed what appeared to be a very large very slow squirrel about 75 yards out.  After about 10 seconds I realized that it was a skunk!  I immediately rushed to the door to call Mookie.  I saw him about 20 yards away from the skunk just watching.  I thought to myself "whew, he was smart enough not to chase the skunk!", called him, noticed his eyes were watery as he came past, and immediately smelled it all with my pregnant nose.  By this point Mat was outside trying to get the skunk in his sights.  He helped me to get Mookie back outside while I was gagging.


Anyway, everyone has heard the old "tomato juice" remedy for skunk sprays, right?  So what did we do?  Thanked our lucky stars that we shop at Costco so we had 6 cans of tomato sauce (not juice, but close enough, right?) on hand... 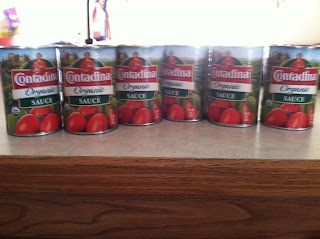 And Mat covered Mookie in it before bringing him in for a bath. 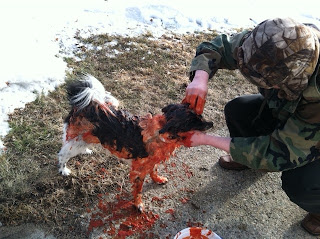 While Mat was beginning to rinse out the tomato sauce... 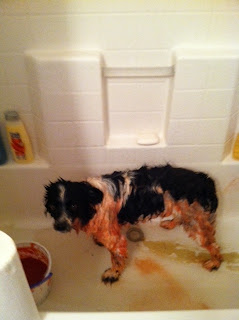 I googled "getting rid of skunk spray on dogs" and came up with this youtube video.  So I mixed up  a bottle of hydrogen peroxide, 1/2 tbsp dish soap, and 2 tbsp baking soda.  Worked like a charm! 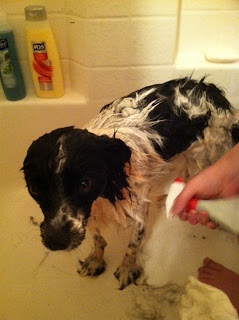 He actually smells pretty good.  Mat was amazing and handled most of it while pregnant me was gagging and mixing up hydrogen peroxide stuff for him.  The tomato sauce really didn't do much but make the smell more bearable to bring him inside for a bath.

I've heard that skunks have been hibernating for so long that they're very hungry and searching for food during the days now.  Maybe Mookie learned his lesson and will steer clear of skunks in the future... that would be nice!
Posted by Malia at 11:40 AM