Busy weekend and a long Monday...

This weekend Daughter and I went down to the Twin Cities for my sister's baby shower.  It worked out that my nephew was getting an award at school, so went a day early so we could go to the ceremony.  We car pooled with my mom, so that we wouldn't have to do the entire car trip (4+ hours) alone.  It was a very busy trip, but fun.

On Friday after my nephew's ceremony, I was able to meet up with some NEDC friends.  Ome of them lives in my sister's neighborhood, so I strapped daughter on and walked over.  One of the friends has twins from NEDC, and one is going for her first transfer in November.  They are wonderful ladies!

Yesterday Mat let me get a good nap (after my mom had taken night shifts with Daughter over the weekend) so I was the most rested I had been since we had Daughter.  I still had to get up to pump, but it was much faster to do that than nurse and get Daughter back to sleep.

She had a total blow out.  All over her clothes, my clothes, a flannel changing pad, a comforter (the changing pad was on a bed) another changing pad (I switched) and I just had to give her a bath.  This was her first bath with mama solo.  We've always done tag team baths... I did pretty well.  She didn't drown and she got clean.  As I laid her down on a third changing pad (this time using a disposable blue pad thingy) she peed through her towel and on the pad.

And she was pretty fussy all day.  And I had to work... Mat brought home Subway and showered and took over.  Both so I could  get some work done and so I could get some respite.

It's a good thing she's so darn cute! 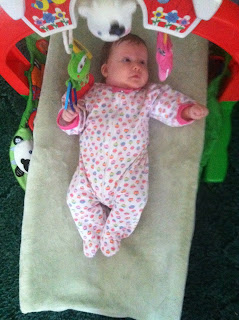