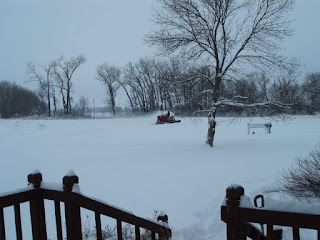 Glad we got that snowblower!  :)

13 weeks and out of the first trimester :)

Some bump pics from 13 weeks 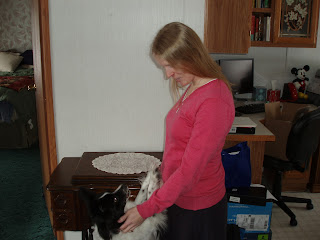 Mookie wants to play when we get home from church... not take pictures! 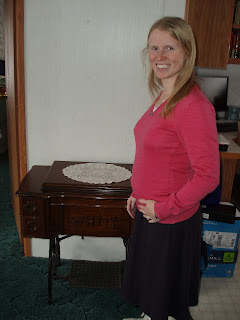 good pic of "the bump" 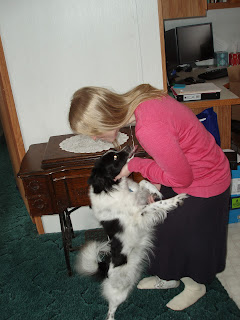 Again, I'm bigger than I should be (according to books) as I've already gained almost 10 lbs (and most of it in my belly and womb).  But my Dr said this is fine with the hormones I was on and with my starting out rather small.

The children God wants us to have

I truly feel that these babies are the children God wants us to have.

Sure, it would have been easier if we were fertile and able to have our own.  Sure, it would have been nice if one of our infertility treatments had worked and we already had live children (one chemical pregnancy and one IVF worked and we were blessed with twins who were miscarried).  Sure it'd be nice if everything worked out the way we wanted it to... but what about what God wants?  Doesn't His will trump our desires every time?

Already in this pregnancy (12w5d) I feel a closeness to Him who made us all, including the miracle wiggling away in my womb.  I have doubts, I'm human- I'm scared to death for our baby!  But I know that God will handle it.  I pray that He lets Wiggler be carried to term, but I also know that His will will be done, no matter what happens.

The trials of infertility have brought us to this beautiful place.  This God given place with a healthy pregnancy with a child God wants us to have.  Embryo adoption is a miracle!

So the crazy hormones are at it again.  This time I was watching Doctor Who "The Beast Below" episode... and when Amy saved the Starwhale I just started bawling.  He came to Earth because he heard children crying!  How sad that he was enslaved and how happy Amy freed him!

Anyway, I was a wreck... happy and sad tears.  I called Mat in for a hug and he asked what was wrong.  Between sniffles and sobs I managed to get out that Amy saved the Starwhale... and he found that hilarious.  Not that she saved it, but that I was bawling because she saved it.  So he was laughing and I started to laugh -while bawling- and I continued to try to explain myself.  His back got very wet.

Anyway, this weekend my friend gave me all her cloth diapers!  A bunch of other baby stuff, too.  I'm anxious to try out the diapers though to see how easy they are for me to use :)
Posted by Malia at 8:41 PM 2 comments:

So yesterday I felt like crap pretty much all day.  I was hoping that it was the Estrace and PIL getting out of my system, not MS rebooting.

Nope, turns out I just forgot to take my B6.  In my head I was thinking "no meds, woot!" and so I just didn't take anything that morning- including B6.

Luckily I take my prentals at night.  When I take those, I take my B6 and unisom (and up until Tuesday, Estrace) so I remembered last night.

Lesson learned.  I took the B6 as soon as I was out of bed this morning.
Posted by Malia at 8:22 AM No comments:

Just got a call from Katie at NEDC.  She received my results from lab tests done Friday and she said I can completely stop the PIL and Estrace!

Both those are currently at 2nd trimester levels.

I am just a tad nervous... I'm not out of my first trimester yet (11 days left!) but I'm so excited to be done with those shots!  Plus, we've seen/heard Wigglers HB 3 times already and it looked great every time and his growth was right on track :)

And tonight is date night... we're totally going to celebrate!
Posted by Malia at 11:31 AM 6 comments:

Yesterday I was 11 weeks.  After church we took these pics. 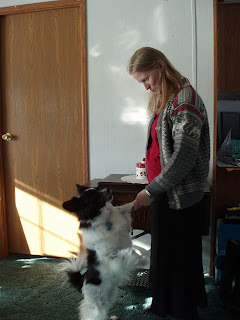 Mookie wanted in on the action. 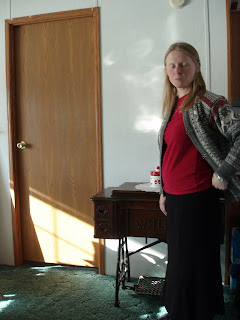 Bad pic of me, but a good pic of the bump! 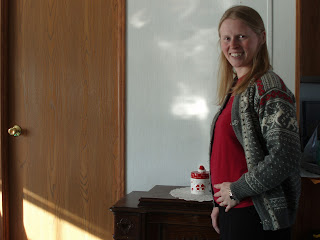 And on our walk on Saturday I took some pretty pictures of the ice on trees.  Horrible weather for driving in certainly makes for some of God's most beautiful scenery :) 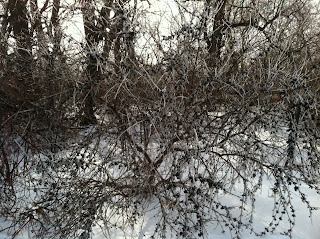 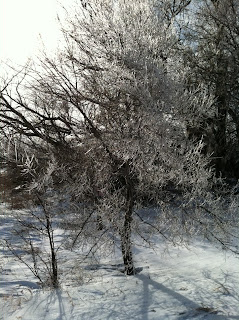 Well I made it.  Actually, I was really early because the roads weren't quite as bad as I had thought they would be.  I only went 55 the whole way (the speed limit on rural roads is 65) but I got there safe.

Our Dr was very nice.  She is a younger woman and she'll be doing the delivery.  That's awesome... where we used to live, you could only have a delivery by the on-call OB and you were just stuck with whoever.  We talked about the kind of birth we want... questions we had.  It was a great visit.

I have gained almost 10 lbs already.  She said that because I'm on hormones (PIL and estrace) that it's really quite normal.  She expects me to gain more than average both for this reason, and because I was pretty thin to begin with.

She did the normal female visit stuff.

She couldn't find the HB with a doppler, so we went for a rudimentary US down the hall.  It wasn't anything like the 6 or 9 week US we had (6 was trans vaginal so it was extra clear) but we were able to see Wiggler wiggling away.  He was really wiggling!  And she saw the HB, we didn't get to hear it or measure it, but she said it looked great.

Then we were going to stop at Subway for our date night.  We got outside and the walk was glare ice!  It had dropped below freezing while we were in there so all the rain had frozen.  Mat had me stay on the curb as he went to defrost my car and drive it up for me :)

We opted not to do Subway... and we made it home in one piece.  A few times along the way I thought "We could have totally gotten Subway" but then I'd hit some ice and realize it'd only get worse.  Mat followed me on the way home and we both made it unscathed.
Posted by Malia at 9:32 AM 3 comments:

There has been on/off freezing rain since last night and there's a lot of fog.  The ND DOT sight said that it was "scattered wet slush" for a while but I just checked again and now its "scattered ice" for half of my commute.

I'm nervous.  I'm definitely going to be leaving very early for the appointment.  Mat works until 3 today, so I made the appointment for 4:00 so that we could go together.  But that means I have to drive myself and meet him there... scary.  I don't like driving in bad weather.

But he won't be able to come with me if I cancel this appointment.  So as long as it doesn't switch to pure ice reported on ND DOT sight, I'm going to try to make it very slowly!

God be with everyone driving today in this weather!  It's worse north of us.

I keep jinxing myself

Twice now I've said "I think the MS is getting better" and twice now it changed and got worse...

Even when my mom asked me if it was getting better, I told her "Yes, but I hesitate to say that because last time I mentioned it, it got worse."

Now it feels sort of like a heart burny feeling in my entire abdomen at night, and the regular MS throughout the day.  It still gets betters in the late morning and afternoon.

I gag on my toothbrush.  It's pretty gross.  I've actually made myself throw up a few times while brushing my teeth.  Come to think of it, aside from barf burps, that's the only time I have thrown up.

Today as I sat at my computer, Mookie started barking like crazy.  There were 5 deer sprinting across the yard.  I love living here :)
Posted by Malia at 9:22 AM 1 comment:

I forgot to post this, but Katie called two days ago with my levels and new med orders.

My labs were taken Monday.

My butt looks (and feels!) like a pin cushion.

But it's all for the blessing that is Wiggler!  Totally worth it... I'd even take the PIL shots in my already oh-so-sore boobies if it were necessary.  I'm glad I don't have to, but I'm just saying :)

Last night I woke up 3 times famished.  I ate a rice krispie treat two times... once I ate crackers.  I need to start having more filling snacks on my bed side table so that I don't wake up so much.
Posted by Malia at 9:00 AM 4 comments:

I get my morning sickness at night...

Funny, but true.  Well, it's more of an all-day thing, but night is definitely the worst.

I've been burping and hiccuping a ton.  It's a good thing that I cut out soda... I can't imagine how gassy I would be if I were still drinking it!

I have been craving diet Pepsi though.  Maybe after I'm out of the first trimester I'll indulge in the occasional soda.

Hubby had a bowl of cereal in bed last night.  A cereal that I had eaten a week before... but the smell made me sick.

None of these are complaints.  We're finally pregnant and we have God to thank for it (and His miracle of embryo adoption).

Every time Katie from NEDC calls and asks how I am, I say "sick, but that's good!".

And it is.  It is truly a blessing.

We love our little Wiggler!
Posted by Malia at 4:00 PM No comments: