Home portion of the home study is today!

Home study is really a misnomer.

We did autobiographies, tax history, budget, letters from employers, background checks, finger printing, statements of faith, gave references (who hopefully have all sent back the info!), and signed our lives away... ok, maybe not, but if you've ever bought a home it's about as much signing as you do at a closing.  Like oh-my-gosh-my-hand-doesn't-work-anymore signing.

I was not as stressed as I thought I would be this week.  I had set up a sleep over with my parents so I could get a hard core cleaning in, but then we cancelled.  Why does the house need to be spotless?  The SW knows that a toddler lives here.  I'd rather have Daughter's sleep schedule somewhat normal than have a spotless house.

One thing I am doing is not getting Daughter dressed until just before her nap, which she should wake up from just before the SW comes.  That way her clothes won't be too dirty :)

I don't like many of the characters, but a few who I feel for are the adoptive parents of Marigold.

Yes, Lady Edith (the birth mother of Marigold) is in pain.  Yes, her situation that leads to Marigold's adoption is tragic.  But does that make it right for her to tear Marigold out of the arms of the Swiss parents who love her?  They never touch on their pain.

This guy addresses it better on the Daily Beast.

Patrick, on Revenge, had his adoptive mother die when he was young and his step mother hated him so his dad did likewise.

The kid on Once Upon A Time was adopted by the Wicked Witch.  Seriously?

Thor's brother, Loki, is adopted and winds up being a villain...

That's all I can think of right now, but why is adoption generally portrayed so negatively in the media?   Almost every instance of adoption I know of is exceedingly positive- but I guess that wouldn't get good ratings.

Next Friday we have the home visit scheduled!

Then hopefully a March transfer :)
Posted by Malia at 9:55 AM No comments:

After the Church service yesterday, Daughter decided to become the unofficial greeter.

Someone tried to give her a high five (which she's yet to master, being as it's a difficult thing to teach one handed as I am) so she ended up shaking the hand.  Then she approached at least a dozen other people and held out her hand until they shook it!  I had to tap a guy on the shoulder to let him know she was waiting to shake hands- he wasn't used to someone down there trying.  She's ordinarily rather shy!  It was so bizarre and adorable! 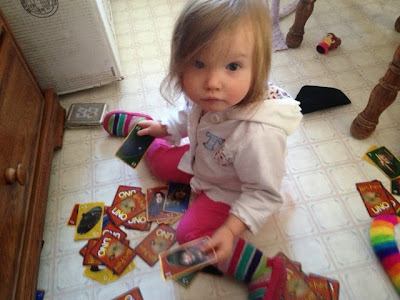 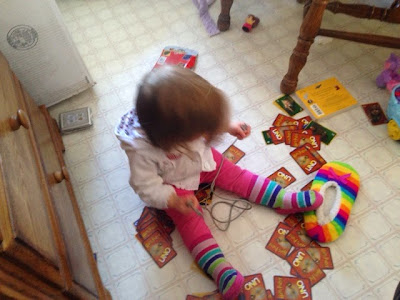 Since 12/20/14 I have had a somewhat major medical issue.  I called Lynda at NEDC Monday 12/22, and she told me to be seen by my local Dr right away.  My Dr told me to see an OBGYN, and the OBGYN told me they didn't have any openings that week and that I should go to the ER.

So I did.  They diagnosed me and said that it probably shouldn't interfere with my plans for a March transfer, but that I would have to go see an OBGYN to know for certain.  They put me on loads of restricions (not supposed to lift more than 15 lbs?  uhm... Daughter weighs 20!) to keep it from worsening.

I called Lynda the following day, 12/23/14, and told her what I had been told.  She said she would speak with Dr K to be certain, but that she was "betting" that I would still be able to go through with the transfer.

Didn't hear back that day... and it turns out they were closed until Friday 1/2/15.  Thankfully, Lynda did email me while the office was closed.  She told me she hadn't had a chance to talk with Dr K before the office closed 12/23 but he was researching my diagnosis.

He wouldn't say whether or not it was likely or probable for me to proceed with the March transfer until after I had seen the GYN.  Presumably, he has no experience with my diagnosis (it's very uncommon in women of child-bearing age).

I saw an OBGYN in Fargo yesterday.  Great news!  Not only did she think that I should be able to go through with the transfer and hold a pregnancy with no problems, but they didn't have to do the surgery/procedure thing that I had been told I would probably need by the ER dr!

I emailed Lynda and she wants me to have them send the visit notes to Dr Keenan :)
Posted by Malia at 8:54 AM 1 comment:

I am very glad that we don't live in the Little House on the Prairie time.  If we did, we wouldn't have Daughter.

We're reading those books to Daughter and last night, in The First Four Years 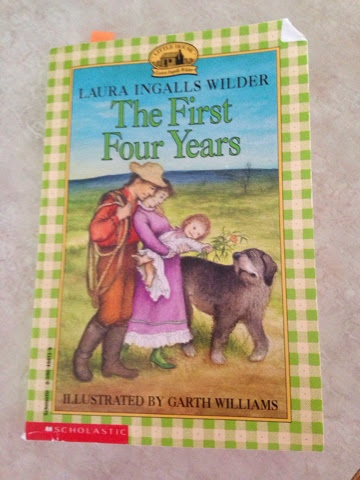 (the last book which covers the first four years of Laura's marriage) the Boasts still hadn't had any children.  Laura and Almanzo brought Rose over to visit and, at the end of the visit, Mr. Boast stood by their wagon and asked (in a strange voice, presumably fighting back tears) if they'd be willing to leave the baby and take the Boasts best horse.  The Boasts couldn't have children and they reasoned (incorrectly, as Rose was the Wilder's only child) that Laura and Almanzo could have more.

My heart broke.  I was washing dishes while Mat read and Daughter played.  I teared up.

We are so lucky to live in a time when adoption (and even Embryo Adoption!) is an option.

There weren't adoption agencies in the Dakotas back then.  I'm so glad that now there are :)
Posted by Malia at 10:04 AM 1 comment: