Wiggler is a girl! 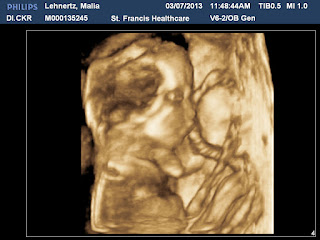 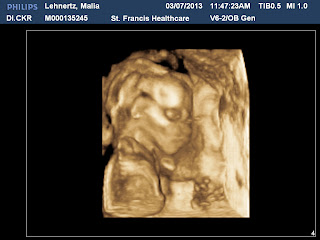 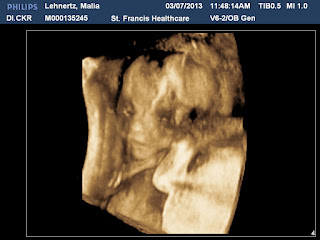 I left very early for the ultrasound because the back roads were covered in snow drifts.  It was a good thing, because I ended up getting stuck about 2 miles from our house!  So close to the main road!  But I called AAA (life savers!) and about 40 minutes later a tow truck came and dug/ towed me out of the drift.  The license plate on the tow truck said "JOY" and then some numbers.  I thought that was very appropriate!

While I was waiting I prayed, read, recited Psalm 23 a few times, and called the hospital to let them know that I would be late.  I ended up being about 20 minutes late (thank God I left so early!), which wasn't so bad.  Mat met me there and we went in together.

The tech was the same one who had done my 6 week and 9 week US.  She remembered me (small town) and said our baby had Mat's nose.  Ha!  I said "That's funny, because she's adopted..." and giggled.  She said "oh I guess she has one of those noses!" or something along those lines.  She's a very nice lady.  She even warms up the US gel :)

Then I ran some errands in town... went to Walmart and picked out our daughters first onesie :) 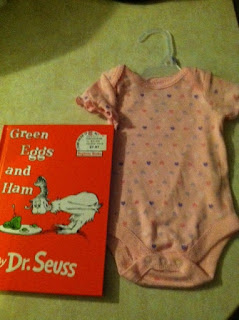 And Dr Seuss books were also on sale, so I got Green Eggs and Ham.

I was just grinning like an idiot the whole time I was in the baby section!  We're so happy!

After my errands I went to hang out with my cousin and her daughters for a bit so that I could follow Mat home for the tire tracks.

What an awesome day.  God rocks!

Another embryo adoption question came up today.  Do the people who donate embryos get paid?  No, they don't.  These are the embryos remaining after the bio. parents pay a boat load of money to do IVF.  Once they're done growing their family, often times they have remaining embryos which they can then donate to other couples for adoption.