We met with Pauline yesterday.  She's the LC we had seen in the hospital and one week after Daughter was born.  She told me that it's perfectly OK to use the nipple shield for as long as I'd like and as often as I'd like.  She had me nurse with the shield and without it.  She told me that it will be easier for Daughter to get milk from a less-than-full breast without the shield, and from the nursing at the visit, that seemed apparent.

So, since the appointment I've nursed about 75% with the shield and 25% without.  That's manageable.  Plus, that way I don't have to worry about attaching a shield if I ever nurse in public using my nursing covers.

After the appointment we ran some errands.  Then we went to my parents place in Fargo to nurse again and she got a "milk coma" (aka milk drunk) 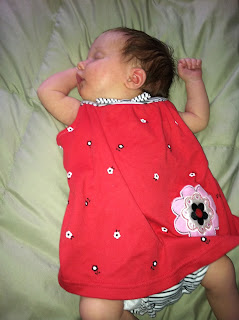