Late, but late is better than never.  I've been writing a paragraph or so every time I get a chance.  Finally finished!

Monday July 29th Mat and I were up at 5 am so that I could eat breakfast.  The version was scheduled for noon and I couldn't eat for 6 hours before hand.  Going in, both Mat and I were expecting the version to work and we'd go home that day and wait for natural child birth.  God had other plans in store...

We got there about 10 (we were instructed to be about 2 hours early) and attempted to check in at two different check in points before being directed to the birthing center.  We got there and they led us to a labor room and hooked me up to an IV and monitoring devices.  One was monitoring my contractions (which I'd been having pretty regularly, just not more than once every ten minutes or so).  They decided to give me some Terbutaline to stop or slow my contractions so that the version would be easier.  We were actually glad about this, because we had read before going in that versions with Terbutaline were about twice as successful as those without.

The nurses were all very nice and answered all of our questions.  Then the Doctor (no, not that Doctor ;) came in and did an ultrasound.  She said based on Daughter's position, there was about a 25% chance the version would be successful.  I was still optimistically thinking it would work, but at that point Mat started having doubts.  Daughter was completely upside down, with her head in the top right of my abdomen, her butt pushing against my spine, and her feet spread out like "landing gear" (Dr's term) with neither of them yet in the birthing canal, but rather on each side of it.

So, then the version started.  Ouch!  I knew I would have some serious bruising (which I did, but it sort of blended with the C Section bruising).  Imagine a "snake bite" like kids do but 10 times worse and on an already tender stomach.  Mat held my hand the whole time and was awesome, as always... She (the Dr) tried three times to turn Daughter... she got Daughter about half turned each time when Daughter would duck her head under the Dr's hand and pop right back into the original breech position.

After three attempts, we gave up.  My contractions had increased, but Daughter was still doing well with a steady heart beat.  The fact that my contractions had increased caused concern... they were now about 6 minutes apart with nothing in my birthing canal.  I was less than an inch dilated.  The Dr told us that we had two options.  We could have a C Section at 4 that afternoon, or we could come back at 6 the following morning.  She warned us that waiting until morning was dangerous, as my contractions were speeding up and Daughter's feet could push out the umbilical cord at any time.  We discussed it and decided that 7/29 would be her birth day :)

So we sat in the labor and recovery room for a couple hours.  We met the nurse anesthetist... I sent Mat to get himself some food and caffeine, knowing that he needed it.  He didn't want to leave me, and didn't want to eat if I couldn't, but I made him.  He was back in about 20 minutes having downed a soda and a quick meal in the cafeteria.  We sat there, prayed, read some Bible passages, and I cried.  I had been doing excercises, we had watched 12 weeks of natural birth DVDs, Mat was getting to be very skilled at helping me to relax for labor... that last one did come in handy.  He is my rock and calmed me down.

So, the time finally came and we walked back to the C section room (in the birthing center, so not a general surgery room) after emptying my bladder one last time.  They had Mat wait outside and put on his over the clothes scrub thingies and face mask.  I went in, got on the table, and from a sitting position the anesthesiologist and nurse anesthetist gave me an epidural and I think something else?  My memory is foggy... but the Anesthesiologist did say that at the hospital she used to work at they always gave the epidurals before attempting versions because they made them much easier on the patients.  I would have agreed... I probably would have declined it if it was offered prior to the version, but it's nice to know that I took it like a champ ;)

Then they laid me down and strapped me in.  They told me they were strapping my arms so that I didn't wiggle and touch any sterile tools... but I'm thinking it was so that I didn't rip down the sheet between my head and tummy.  I can only imagine being drugged up and doing so, seeing my tummy open and freaking.  Anyway, then Mat came in.  He held my hand the whole time and actually looked as they took Daughter out of my tummy.  They held daughter up to my face right away.  Mat tried to get a pic, but it was blurry and rushed.  I cried and kissed my daughter for the first time.

Mat went with Daughter and the nurses to get her cleaned up and checked over in the nursery.  The Dr and a med student then sewed me up and I was forced to listen to Miley Cyrus for a bit while they did... although I heard the original version of Weird Al's "Party in the CIA" for the first time.  Weird Al does it better...

Anywho, when they finished stitching me up they transfered me to another bed and wheeled me to my room.  I had been told that I would probably get there after Mat and Daughter, but I beat them.  I think I may have fallen asleep a bit, but when they got in there Mat handed me Daughter for some skin to skin.  She immediately migrated toward my breast and latched on about a minute after the skin to skin started!  This probably reaffirmed my false belief that nursing would be easy... but the nurse looked shocked and said that she had never seen that before.

I couldn't get out of bed for about 24 hours, so Mat was the caregiver.  That first night neither of us got any sleep.

Here are some pics from the hospital. 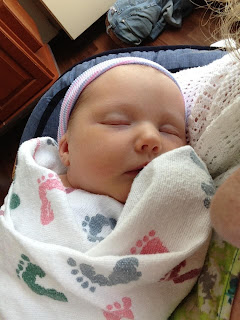 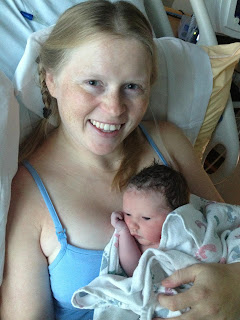